The Rings of Hesaurun
A grand feast of the imagination.

"A top-notch, fast-paced suspense/sci-fi/time travel fantasy-adventure with an epic scope, myriad of characters, and settings. A thrilling page-turner that puts the reader inside the mind of the characters. Brilliant character development akin to King or Koontz."

Michael Smith
“Imagine a time—anytime in your life, you could contain ‘time’ that escapes us all? Author Peter Harrett takes you beyond your soul, ego and own eyes to a place only the strong hearted can survive in the first book of his series, The Rings of Hesaurun. A great read! Looking forward to the second book in the series, The Ring Bearer.”

Pamela Trush
“The Rings of Hesaurun is a grand feast of the imagination, and an triumphant return of Epic Sci-Fi! Peter Harrett’s story unfolds and wraps itself around your brain with knife-edge suspense and haunting originality. This is the novel most authors only dream of writing!” 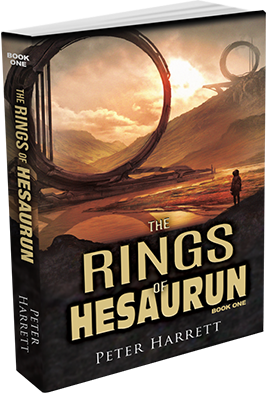 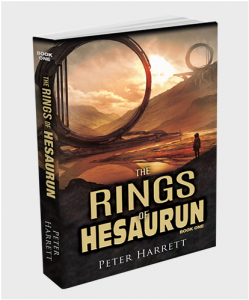 In a galaxy on the edge of cosmic oblivion, one girl must embrace a power she never summoned and fulfill a destiny she never chose.

Five Rings…On the ravaged world of Hesaurun resides an ancient species of sentient mechanoids, The Preservers. Burgeoning with power and determined to cleanse the cosmos of evil, their world-bending potential remains dormant in the absence of a worthy, organic vassal.

An Extraterrestrial Menace…The Boecki, a vicious race of alien tyrants. Fueled by an insatiable hunger to conquer and consume, they will stop at nothing until they’ve devoured every last biosphere across the galaxy.

One Girl…Valerie Dunne, a waif adrift. She is all but a trivial human child until time ceases to work as it should, and an unforeseen destiny rewrites her entire existence. Now, thrust into the heart of a bitter, intergalactic struggle for survival, Valerie is forced to champion a fight and master a power she neither knows nor requested— or watch as The Boecki consume everything.

An action-packed, coming-of-age fiction series about a girl who must navigate her way through a purpose she never knew existed. Book One in The Hesaurun Ring Series kickstarts the epic Sci-Fi thriller that’ll have readers clutching their seats in suspense and excitement.

Learn More About The Rings of Hesaurun

Born and raised in Oregon, Peter D. Harrett has spent most of his adult life in Western Washington, where he lives with his family. Peter credits his interest in language and writing to his grandfather, Peter James Bennett, a prolific poet who was both a mentor and a role model, and continues to shape Peter’s life and character to this day. The Rings of Hesaurun; Book One is Peter’s first novel. 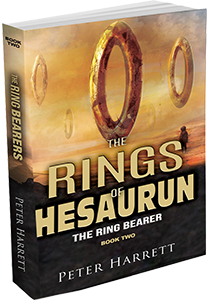 The fate of the Earth, and all humanity, rests in the hands of Valerie Dunne, the heroine from Book One of The Rings of Hesaurun. Thousands of years in the past, warring alien forces are preparing to harvest planet Earth of its resources, and enslave the human race, or stockpile them for consumption. Meanwhile, on Earth, young Valerie finds herself used as a pawn in a ruthless power struggle against both alien and human forces bent on possessing the rings—at any cost. Will Valerie succumb to the terrifying threat of revenge from her nemesis, Egan Stone? Or will she finally learn to unleash the awesome power the five rings contain?

This astonishing, breathlessly-paced sequel to The Rings of Hesaurun is packed with spellbinding twists and turns. Weaving in an immense cast of memorable characters, with Book Two: The Ring Bearer, Peter Harrett has once again crafted a riveting universe of immortal conflict, love, loss and survival.

The Rings of Hesaurun, Book 2: The Ring Bearer 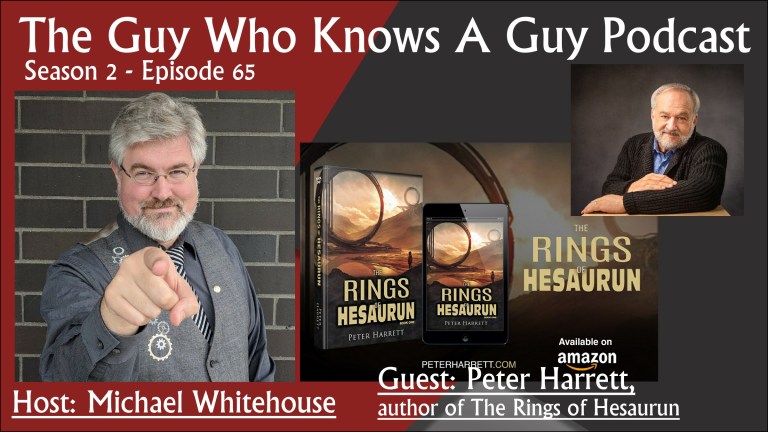